With the new year rapidly approaching my lair deep in the heart of North Carolina,
I want to share with you some of the things the new year will bring at NAFOM
I have been amassing some guns to review, as anyone who has read this blog before knows, I like strange stuff.
My newest acquisition has been a Tanaka Colt Combat Python, 3" in Midnight gold. 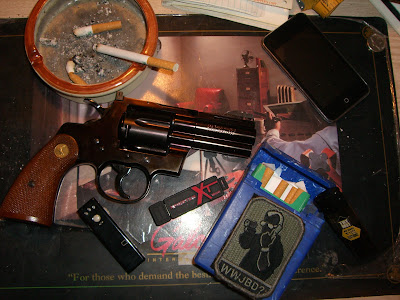 Was shooting for a modern PI style with this pic, Kind of a updated "Last Boy Scout" look
I also have a dozen or so revolvers to add to the review mix, in addition to a Digicon straight, a Calico 1000, AGM Sten and some other oddities I have picked up here and there.
SHOT show is coming fast, 16 days and counting until the trek to Las Vegas begins again.
I will try and update you from the show, so keep a close eye on this site on January 18th thru the 23ed.
My goal this year is to do one review every two weeks,
I never make my goals but some doctor somewhere
( court appointed, more than likely)
told me it was good to have goals.
Here are a few guns I will not be reviewing

This is the new desert eagle in 50 cal BMG, grip is a little slim for my taste. 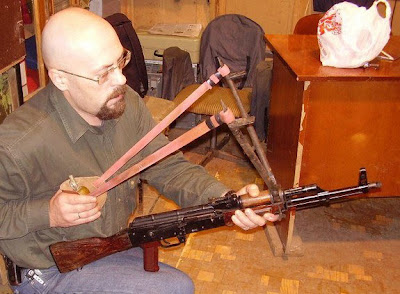 A Practical AK, but I am not a big AK fan
Please join me in the new year, and tell all your friends to come on by,
we should have a laugh or two and maybe you will pick up some info you didn't know about.
And remember, always have a backup plan, 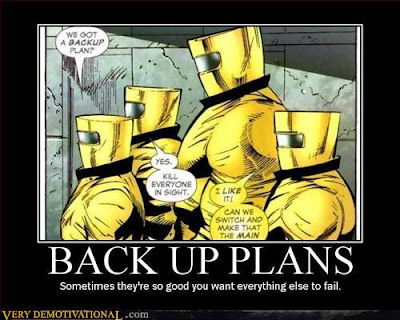 I hope the new year is the best one so far for you, may you never run out of battery power in a skirmish,
may your GBB's always stay lubed
and may all your bb's fly true.
As I just turned another year older, this is what I have to look forward to this year 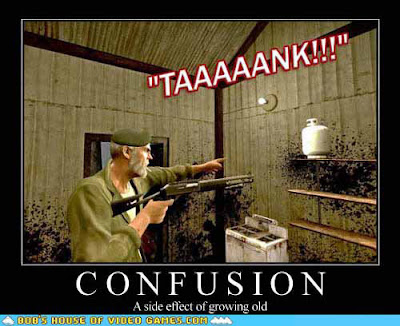 I have to add a addendum to this post.
After reading a lot of the blogs I follow tonight, I have found that most of them have HUGE plans for 2011.
Writing books, opening stores, having movies made about their blog ,
everyone has better goals than I set for myself.
So here are my new goals.
I have been talking with my dog Chance ( Dollie, the female puppy wants nothing to do with this) and we are going to
TAKE OVER THE WORLD.
I got the idea when Geoff, the metal mohawk haired robot on the Craig Ferguson show, started sending me coded signals thru my new HD TV. 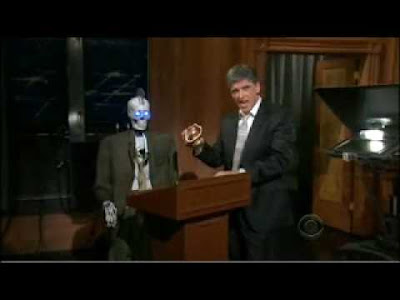 I will release more info on the plan later, as I will need more henchmen for my plans of
WORLD DOMINATION.
(That's better than any old movie, book or store any day)


Till tomorrow,
Stay Thirsty My Friends.

Posted by Tim Ellwood at 8:21 PM No comments:

Your After Christmas Laughs are here!

Hope yall had a food filled, Wrapping paper ripping day.
Hope Santy Claus brought you everything that you had on your list, and a surprise or two also.
From me, all you get is a belly laugh out of theses gems I found on the Youtube!
NOT SAFE FOR WORK DUE TO LANGUAGE


If you see anyone you know that resembles these vids,  best to keep it to yourself.
Most people are stressed at this time of year and you don't want to cause an "incident" 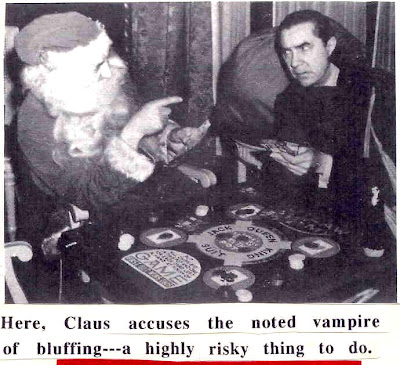 Notice there is no "sparkling" on this Vampire
Back in my day, they ripped your throat out, not bored you to death with angst. 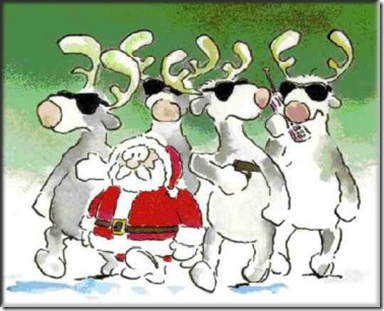 I guess the big red guy won the poker game, or he is just taking a stroll in downtown Greensboro! 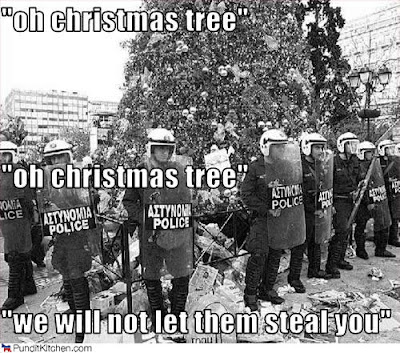 One day an old German Shepherd starts chasing rabbits and before long, discovers that he's lost. Wandering about, he notices a panther heading rapidly in his direction with the intention of having lunch.
The old German Shepherd thinks, 'Oh, oh! I'm in deep doo-doo now!' Noticing some bones on the ground close by, he immediately settles down to chew on the bones with his back to the approaching cat. Just as the panther is about to leap, the old German Shepherd exclaims loudly, 'Boy, that was one delicious panther! I wonder, if there are any more around here?'
Hearing this, the young panther halts his attack in mid-strike, a look of terror comes over him and he slinks away into the trees. 'Whew!' says the panther, 'That was close! That old German Shepherd nearly had me!'
Meanwhile, a squirrel who had been watching the whole scene from a nearby tree, figures he can put this knowledge to good use and trade it for protection from the panther. So, off he goes.
The squirrel soon catches up with the panther, spills the beans and strikes a deal for himself with the panther.
The young panther is furious at being made a fool of and says, 'Here, squirrel, hop on my back and see what's going to happen to that conniving canine!
Now, the old German Shepherd sees the panther coming with the squirrel on his back and thinks, 'What am I going to do now?', but instead of running, the dog sits down with his back to his attackers, pretending he hasn't seen them yet, and just when they get close enough to hear, the old German Shepherd says...
'Where's that squirrel? I sent him off an hour ago to bring me another panther!
Moral of this story...
Don't mess with the old dogs... Age and skill will always overcome youth and treachery!
BS and brilliance only come with age and experience. 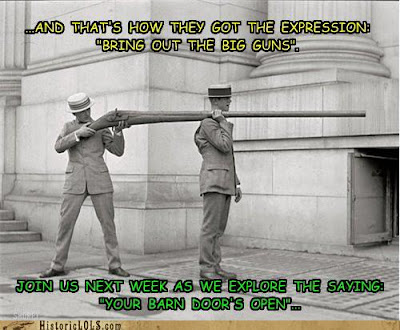 Till Tomorrow,
Stay Thirsty My Friends.
Posted by Tim Ellwood at 11:53 PM No comments:

Everyone needs some calmness this Holiday season

I am passing this on to you because it definitely works, and we could all use a little more calmness in our lives. By following simple advice heard on the Dr. Phil show, you too can find inner peace. Dr Phil proclaimed, "The way to achieve inner peace is to finish all the things you have started and have never finished."

So, I looked around my house to see all the things I started and hadn't finished, and before leaving the house this morning, I finished off a bottle of White Zinfandel, a bottle of Bailey's Irish Cream, a package of Oreos, the remainder of my old Prozac prescription, the rest of the cheesecake, some Doritos, and a box of chocolates, and a half bottle of scotch.

You have no idea how freaking good I feel right now. 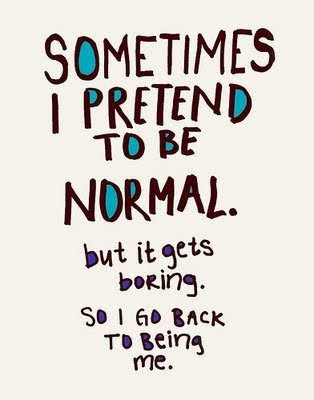 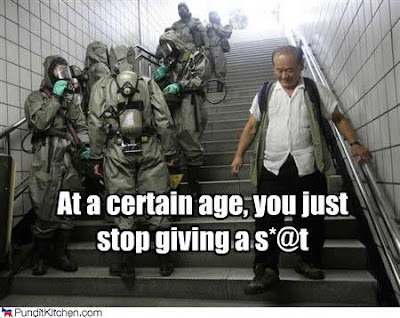 Till Tomorrow
Stay Thirsty my Friends.
Posted by Tim Ellwood at 11:26 PM No comments:

Why I only use ESS Goggles.

The staff, training facilitators, marketing dept, interns and owners of NAFOM
only use ESS goggles
And here is why.
Last January, before the epic trip to Las Vegas for my 24th SHOT show began, we did a little testing in Texas.
Using a 350 fps Strafer 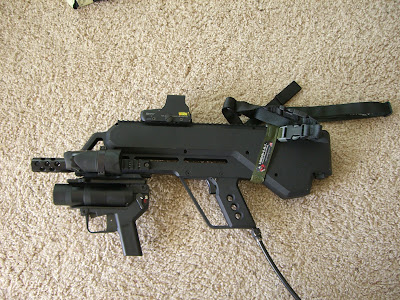 Now this little beasty puts out 175 .25G 6mm airsoft bb's per second
(Yes, everyone should own one, get yours at www.xcalibertactical.com)
So, we placed a set of the new (at that time) ESS  Profile Airsoft w/ Cortex Clip
on to a poor, defenseless, Styrofoam head  that we just happened to have laying around
(don't ask)
Here are some pictures after unloading 400 rds into the Goggles 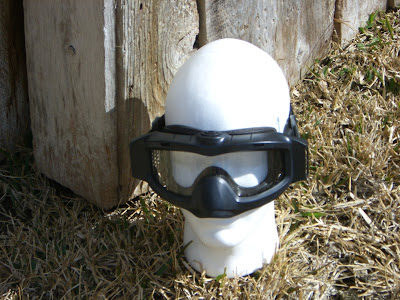 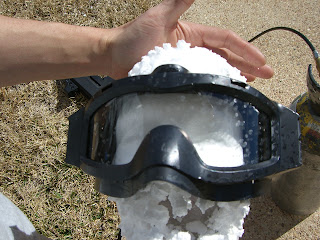 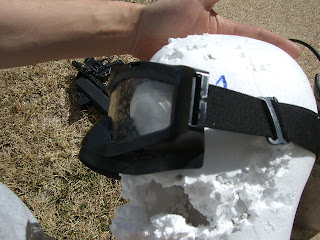 ABSOLUTELY  NO PENETRATION OF THE GOGGLES
Nothing got thru, not one, this was impressive. 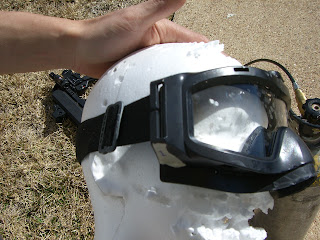 Lots of marks,
I would replace the lens before using them again,
but not one bb made it through. 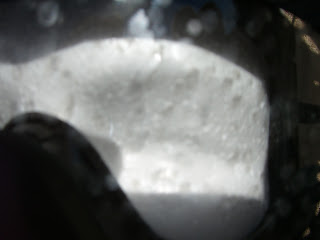 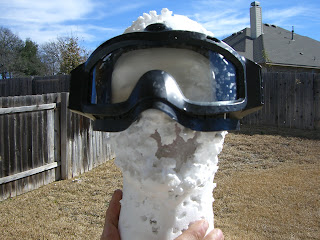 Mr Foam Head gave his life for this test
I, for one would like to thank him for his sacrifice.
I think now you can see why I only use ESS,
I don't have anyone to pay my medical bills but me, if I use inferior goggles and I get hurt.
You can't replace a lost eye, when people chose to use untested or cheap goggles they are showing a deep disrespect for the other players on the field along with putting themselves at risk.
Go to the ESS website and check them out for yourself.
http://www.essairsoft.com/
This was not a paid review, the goggles were given to me by ESS for testing
and I was told to publish what ever I found out about them.
Good or bad.
All I found was good and I looked for something bad!
I will only use ESS for all my eyewear needs.
They are the only big name company that make specific goggles for the airsoft market.
They tested them and they did right by us airsofters.
They are also great guys, and that's just icing on the cake and boy, do I love cake 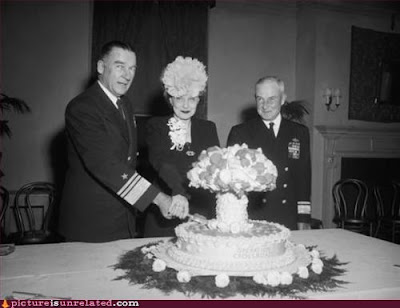 Come to think of it, Mr Foam head looks like icing, were did I put that thing?
Bottom line, buy ESS Goggles if you care about being able to see after a head shot.
I have a video,  I will get it cut and added soon,
hey, it only took me 11 months to get this posted,
so I am doing good.
Many thanks to Sam at X Caliber Tactical for the Strafer, bb's and back yard
and for putting up with an old man.

As a side note, last year I was wearing a set of the ESS advancers while riding my front yard mower
(yes I have one for the front and one for the back, doesn't everyone?)

I hit a huge rock
( yes, I had on safety eye wear, but was listening to dean martin on my ipod thingy so I was distracted.)
The rock chip ricocheted off the lawn edging and hit the right lens of my Advancers,
Cracked the lens, but had I been using a cheaper pair of glasses, or none at all, I would be  in a good position for using a pirate costume for Halloween each year from then on.
Like seat belts, you never know when they will save you.

I don't always skirmish, but when I do, I only wear ESS
Till tomorrow
Stay Thirsty my Friends.