http://shot11.mapyourshow.com/3_0/exhibitor_details.cfm?exhid=312477&markcamefrom=y
Makes me wonder if Cybergun is now licensing Blackwater's name for airsoft?
Guess I will find out in 48 days
Posted by Tim Ellwood at 1:24 PM No comments:

Just got back from having my Delicious Turkey Slam sandwich at Denny's.
I hope all of you celebrated like I did in the traditional way.
Now it's time to shop 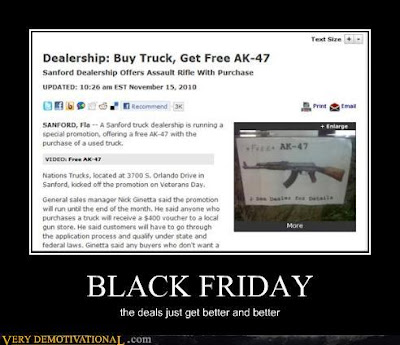 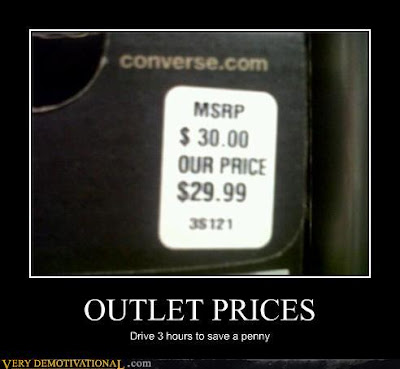 Hope you find everything your looking for.
I wear a size XL, I'm just saying.
Till tomorow,
Stay Thirsty my Friends
Posted by Tim Ellwood at 11:50 PM No comments:

Time-line
Nov 5 2010   A finding letter appears that you have seen in my last post
Nov 12 2010   Finding letter disappears from the BATFE website.
Nov 23    A new FAQ appears on BATFE's website
Q: Does the ATF regulate the sale and possession of air guns? Is an air gun classified as a “firearm” under Federal law?
The term “firearm” is defined in the Gun Control Act of 1968, 18 U.S.C. Section 921(a)(3), to include (A) any weapon (including a starter gun), which will, or is designed to or may readily be converted to expel a projectile by the action of an explosive; (B) the frame or receiver of any such weapon…. Based on Section 921(a)(3), air guns, because they use compressed air and not an explosive to expel a projectile, do not constitute firearms under Federal law — unless they are manufactured with the frames or receivers of an actual firearm. Accordingly, the domestic sale and possession of air guns is normally unregulated under the Federal firearms laws enforced by ATF.
We caution that ATF is not charged with enforcement or oversight of the firearms laws of States or localities. To determine possible restrictions on air guns where you reside, we recommend that you contact the office of your state Attorney General, the State Police, or other State/local law enforcement authorities for further guidance.
Now, I am not a lawyer, but a very hard working one had this to say about it,
( plain English, not legalese, version)
"In other words unless you build an airsoft on a firearm receiver the airsoft guns are ok as imported.  If you actually build your airsoft into a functioning firearm you have a whole different but individual problem."
http://www.atf.gov/firearms/faq/firearms-technology.html
Although I made repeated attempts, ATF has not contacted me back.
Is this the end of story for Airsoft and the BATFE
I would be a Pollyanna to say yes.
Just like the fights for real steel firearms in the US, it is a daily ongoing fight.
I will be joining the ASTM next week as this is one of the only ways that consumers and users of items in the USA can have a voice.
I want to thank the legal staff at the NRA for all their help
and being interested enough in our "toys" to care.
I also want to thanks Thumpy's house of airsoft, popular Airsoft and Arines for getting the word out.
To recap, from Nov 5th to Nov 12th GBBR m16's were firearms. From Nov 12th till the 22ed they might have been. Now on Nov 22ed they are not, but who knows what tomorrow will bring.
I hope now I can just do some reviews and tell jokes, I like that much better

It's official, GBB M-4s are firearms per BATFE as of Nov 5th


I saw this when it popped up  on Nov 5th,
I wanted to wait till I had some word from ATF themselves as to the disposition of the replicas.
I had to write them a real letter, that's right, paper and all, to get an answer.
So far, no reply.
I know that this makes the GBB M-16/M-4 a "unregistered" firearms
( in the respect that the serial number was not recorded with ATF at time of manufacturing).
If I do not get an answer before Jan I will make it a point to talk with them 1st thing at SHOT.

I have calls out to the NRA, (now, for the 1st time airsoft is kicked into their court )
and BATFE. being a holiday week, I doubt anything will come back, but I will keep you updated.
update
now this has been found.
http://www.examiner.com/gun-rights-in-national/why-did-atf-issue-and-then-rescind-a-ruling-declaring-air-guns-firearms

I am trying to track if it is correct by phone as I type.
but a phone call and a finding letter are two different animals.
I will keep you updated

Posted by Tim Ellwood at 8:31 PM No comments:

More Licensing issues with Airsoft, Lawsuits, or worse, to come?

Madbull just released this out to the Airsoft Community
Nov 20th 2010
( Bold is my addition)
Dear Airsoft players and manufacturers,
We are proud to announce that Madbull Airsoft have been granted official licensing from Troy Industries, PRI (Precision Reflex Inc.), Surefire Suppressors, Lancer Systems, Reset Inc. (U.S. Army future soldier systems), KelTec, and Viking Tactics (U.S. Retired Delta Force). Many more are currently in the works too!
Madbull Airsoft will also begin to work with more than 20 US Firearm companies for “Operation Copycat” an international operation to combat all unauthorized copies from Asia. This large scale operation will be run by several law firms, Customs Agencies, and local law enforcement.
Most unauthorized copies are 1:1 scale which can be easily applied to a real firearm. This poses a problem because whereas they are 100% visual copies they are not constructed by the same materials and do not possess the same build quality. This is a huge risk to any end user since it’s highly probable that the copy will malfunction and cause serious damage to both the weapon and user. Many of these firearm companies receive damaged returns which turn out to be an unauthorized copy that has failed but bare all the correct trademarks but were manufactured in Asia. Note that all these copies were imported illegally and that any product baring unauthorized trademarks or trade dress is against the law.
But it’s not all bad news; some good news is that a few Asian manufacturers have given us their full cooperation with our efforts. A notable mention would be, Tokyo Marui, a highly reputable company.
We at Madbull highly encourage other airsoft manufacturers and players to support legal, authorized, and officially licensed products. This is a win-win for all; licensors (who respectively pay to use trademarks), real steel manufacturers (for all their hard work and countless hours developing these products), and players who get to enjoy 1:1 scaled airsoft only authorized replicas. All the royalties paid is motivation for real firearm companies to continue to create more great and exciting products. This benefits both the real gun industry along with the airsoft industry and ultimately you the airsoft player.
Any questions or inquiries, feel free to contact our license department: info@isgk.org
Sincerely,
Madbull Airsoft


Sounds to me like if you are waiting for a shipment from Asia of some "Grey Markets" parts, the chance of them getting here has just gone way down.
I need to put some more thought into this subject before I jump in with a rant.
While I do totally agree with Licensing, and have even worked with people in that area for a company,
(not airsoft), I can also see the other side of this issue.
I had a very prophetic conversation with a long time airsoft journalist at the 2010 SHOT show.
My stance was that all of us in the industry had to become more professional and convey a better image.
I had met many airsofters that week that projected the "skateboarder" persona
and I thought it was detrimental if we ever wanted to be "taken seriously"
( In my defense, I am old and started this fight in 1986,
long before 99% of the people in airsoft now were born).
His stance was that we had to keep it more underground, that if more of the "suits" found out about us, it would ruin airsoft.
Looking back today, I think he was right.
Airsoft is growing up, the days of enthusiasts opening companies to sell to like minded players are ending.
MBA are running airsoft companies now,
with P&L statements and some with even shareholders to answer to.
I am going to go out on a limb here and predict that five years from today
( if the world is here after Dec 23 2012, that is) 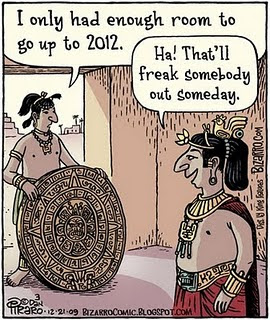 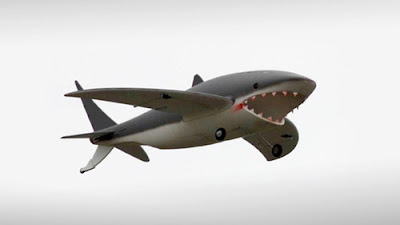 Are we finally seeing airsoft grow up?
Or did Madbull just jump the shark.


Till Tomorrow,
Stay Thirsty my friends. 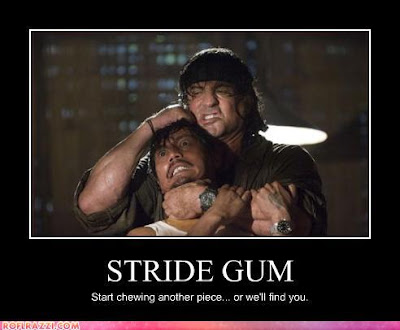 Newest video teaser from the wacky guys at Beat Down Boggie
Yes that's me at 0:43 sporting an Areas FNC with a C mag.
The gun will miraculously become a patriot pistol half way thru because the FNC was too damn heavy to keep shouldered with a broken collarbone ( that I found out I had after the shoot).
But I had a blast, Thanks again guys.

Posted by Tim Ellwood at 1:59 PM No comments:

I like to see new guns hit the market, found this tidbit on a design blog
http://www.pddnet.com/news-speeding-up-airsoft-gun-development-111810/
Don't know if it will be spring or gas, but hey, it's not a 1911 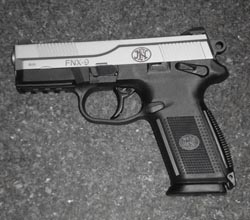 Pic of real steel FN, not the airsoft one

Email ThisBlogThis!Share to TwitterShare to FacebookShare to Pinterest
Labels: Airsoft

Shameless Plug for my stuff

While airsoft is my Mistress, Flashlights would be my wife
So because lighting systems pays for my addiction to this huge airsoft monkey on my back, I thought you wouldn't mind a blatant plug for our new light.
How is this related to airsoft?
Night games are always fun, but never well lighted for the admin area.
Also, if you have a incident on the field, you can never have too much light.
This also works for all you video gurus out there, light, no cords and will not put out a ton of heat.
I also thought because most of us have a day job you might spread the word for me.
Fire, industrial, LE, Military and job sites.
Let me know if you need any more info
This was my pitiful attempt at a video
Till Tomorrow,
Stay Thirsty my Friends

Posted by Tim Ellwood at 3:08 PM No comments:

I am looking forward to the "new" Red Dawn Movie 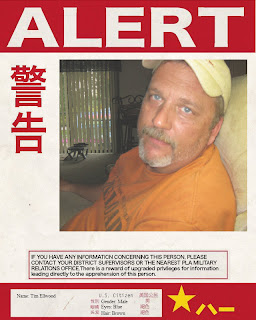 Now even the Chinese want me, it is so nice to be wanted!
I have a review coming on the "Jed" 45 single action army by Marushin.
Stay tuned.
Posted by Tim Ellwood at 12:11 AM No comments:

This is a movie I can't wait for!

Battlemechs, Nazis, WWI Trench warfare with M4's, Bombers and zeppelins,Samurai and dragons and hot females in short skirts, these guys need to get out of my dreams!

I doubt you could get permission, but it would be fun to run a Zombieland game before they scrap it.
Bastards took down the video, sorry

Posted by Tim Ellwood at 5:49 PM No comments:

Just a quick insert of this YouTube vid.
I love obscure and odd guns, the stranger the better for my taste.
That someone would take the time to mod a airsoft gun into a bizarre pistol like this is just great,
being as there were only 100 ever made in real steel.
My hat is off to this craftsman, kudos sir.