Funnys from my day job

As some of you know, I make my living selling flashlights.
Not just any Flashlight, but the brightest and the best Flashlights.
www.foxfury.com
http://foxfury.blogspot.com/
That being said I just wanted to share some Funnies a fan of Foxfury made.
I thought they were real good, I know I could never be this creative. 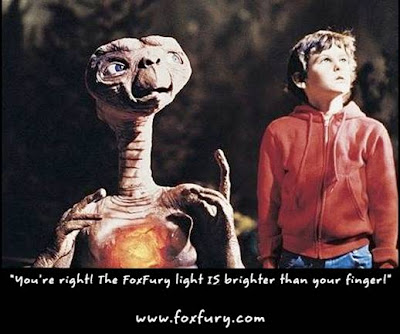 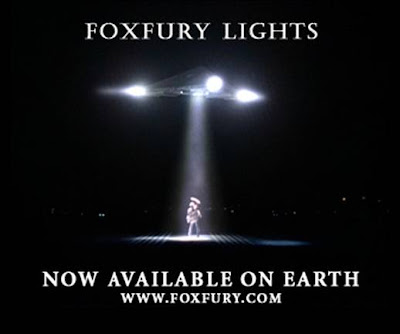 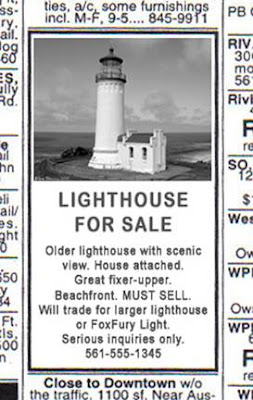 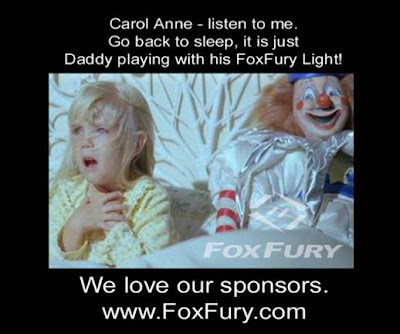 That's funny stuff right there, I don't care who you are.
Till Tomorrow,
Stay Thirsty my Friends.

Posted by Tim Ellwood at 1:15 PM No comments:

1987 Airsoft Catalog, real blast from the past

As most of you know,
I have been involved in this Airsoft thing for a while.
I just took the time to scan in the catalog I produced in 1987.

When I say I produced, I mean I wrote the copy, did the layup and layout, everything but the pictures.
My ugly mug is even a model in most of the pictures.

Command Post was the 1st airsoft/Paintball catalog in the United States.
This catalog I have scanned was our third, 1987/88
I had no background in copy-writing or printing.
I managed to muddle though it though and I think we shipped out over 20,000 copies.
Laurence Lee Littlefield started the company in 1985,
I came on in late 86, left in 88 and I think it lasted till about 1990.
I worked with some great people there, met a lot of great customers in my travels to shill for the company and have some fond and not so fond memories of trying to convince people that we were not selling real guns!
In 1987 at one point you could turn over any of the "Mens adventure" magazines in a newstand
(these were stores that sold just newspapers and magazines in the old days)
and my smirking mug would be on a full back-page ad trying to sell our ill fated paintball helmet.

I am posting this up because there is a huge dearth of airsoft history on the net,
and not for any ego boosting self promotion
( well, maybe a little, I am proud I was involved with it)

I have dropped out most of the paintball and other stuff, we sold Keith Idema Combat Systems vests and holsters ( look up Keith on Goggle, ya, it's the same guy), Al Mar knives, Cold steel knives and lots of other stuff.
If anyone wants to see the full paintball stuff, let me know, I am just putting a sampling here.
Well, I think that was enough ado, so with out any further, here you go,

Click on the images to make them larger so you can read all the wonderful verbiage and hyperbole I came up with to describe each gun. The more I look at it now the more I cringe,
seems like ever other gun was the "best" 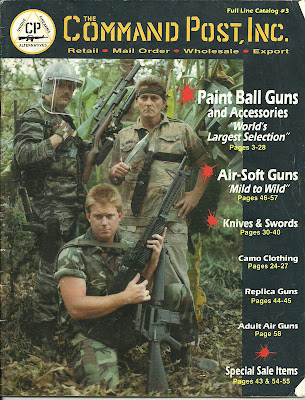 Yes, that is me on the left, and that is the gun I used to travel with to paintball fields around the US,
most people would just run away from it. 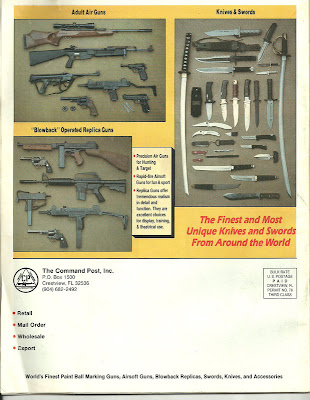 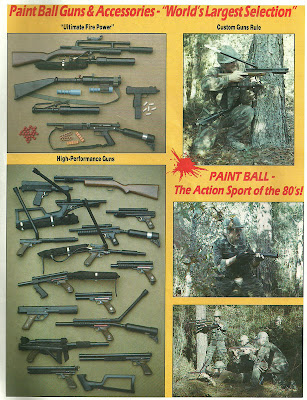 The Tippman SMG 62, that gun was a blast 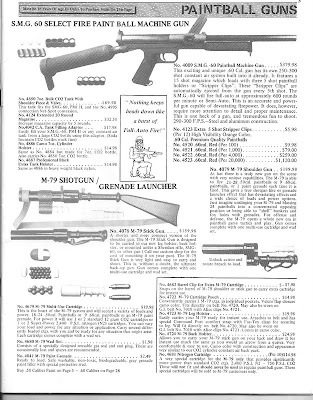 Para Ordnance made paintball guns before they ever got into real steel
and we were the US distributor of the Model 85, they were fun little toys.
We spent a lot of time developing a reloading kit to get the cost of the ammo down.

The M-79 was a Less than lethal unit called the UnGun, as seen in the Steve McQueen movie "Hunter",
they shot out a bean bag using Nitrogen capsules ( like 12 gram CO2s)
We bought up the remaining stock and turned them into paintball grenade launchers 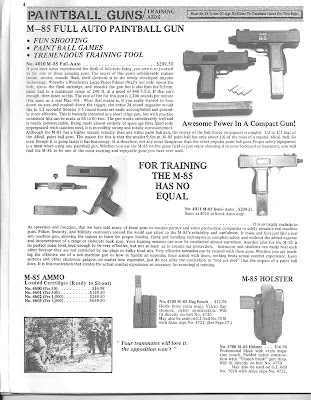 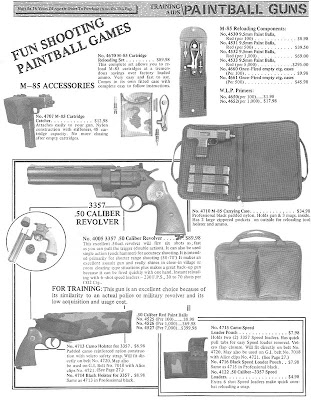 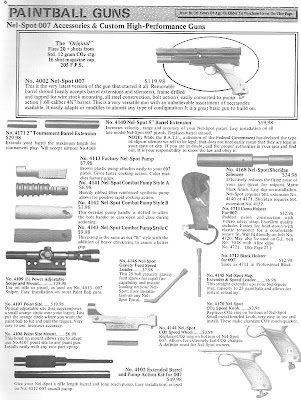 The Nelspot, the gun that started it all. 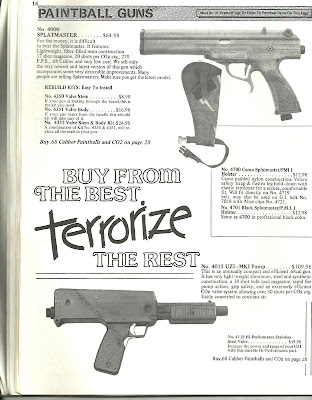 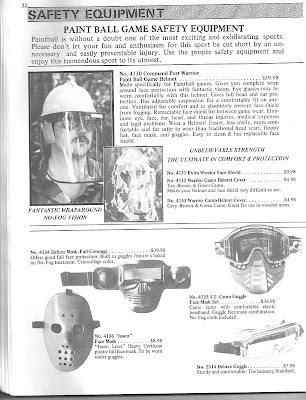 You can see we didn't know squat about eye safety, no Dr Airsoft around then, but we did have a inkling and tried to sell the helmet. we built them by hand in Crestview, I spent many long hours cutting and fitting, in the end, no one gave a crap about being safe then. 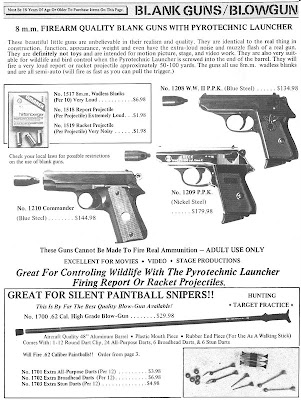 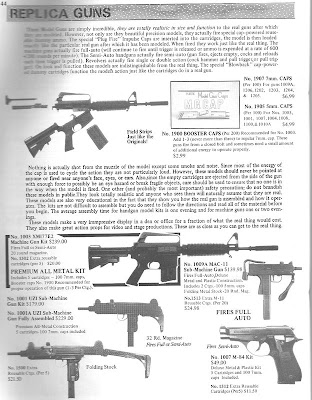 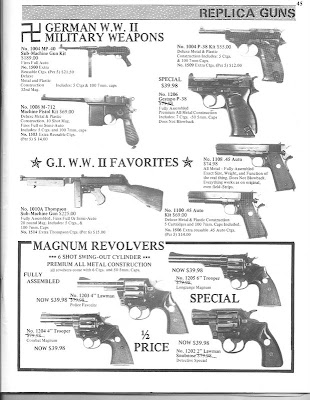 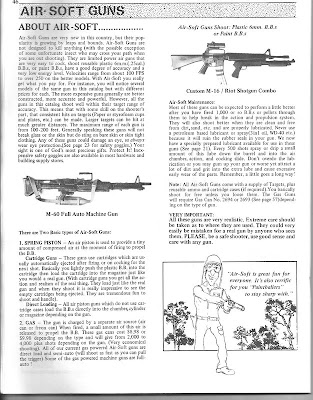 My introduction of airsoft to the US, I spent many hours writers blocked on this page! 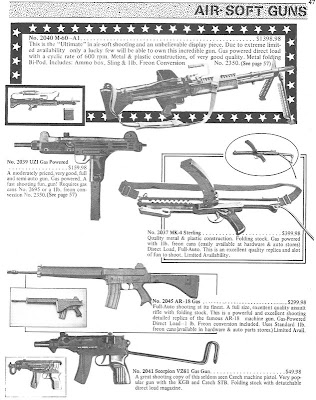 Yes you read right, we offered a conversion kit so that you could power any of the direct air guns with Freon.
Freon, yes. Back then we had no clue, I didn't even know who Al Gore was!
It worked great though and you could buy the stuff for 1.99 a can at the Kmart. 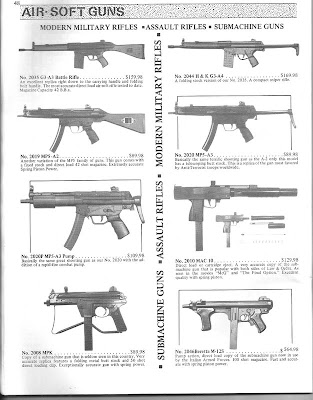 Spring Tokyo Marui's, ever seen the mac or the M12 before? 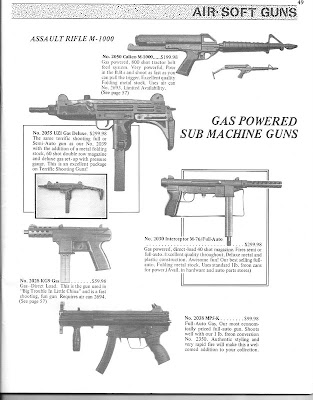 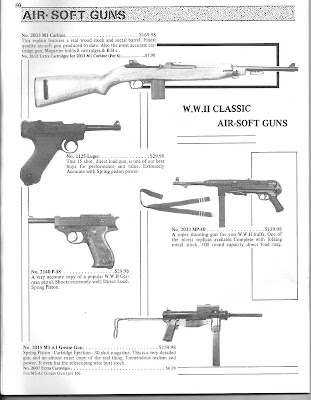 I think the Grease gun was a Hudson, but it took plastic ctgs like the Soft air guns, 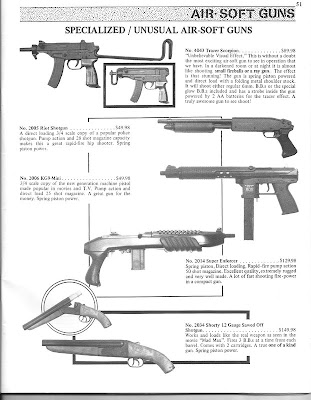 The Scorp was so cool, it had a light in it that charged the bb's ( like a tracer unit today), can't remember who made it though. Has anyone seen one of these "Mad Max" guns with the spring loaded ctg's, I remember the box having Max on the front with the shotgun, it must have been a Hudson, they even sold a nylon holster for it. I still think I have one of the holsters floating around 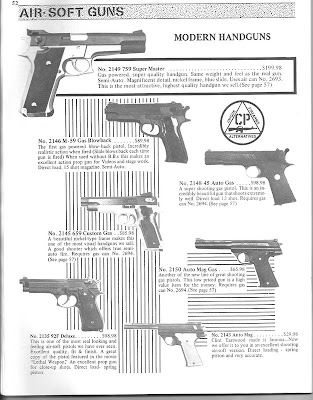 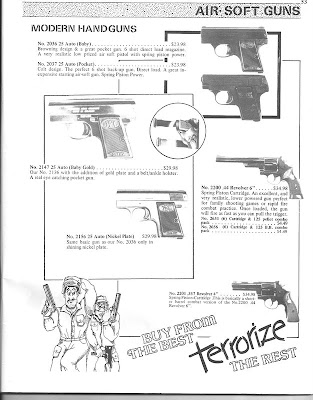 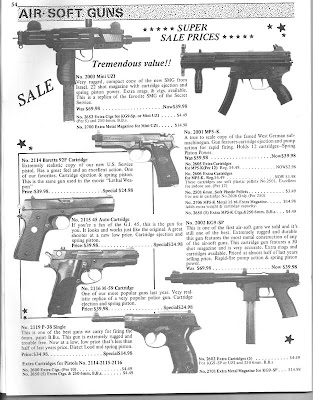 We bought out Daisy that year of all the "soft air" guns they had, I mean boxcar loads of them 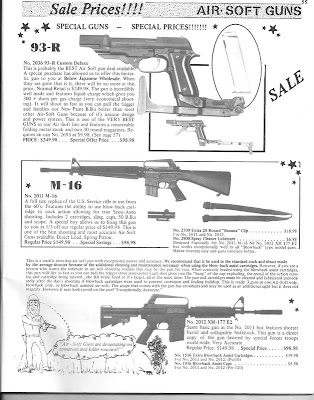 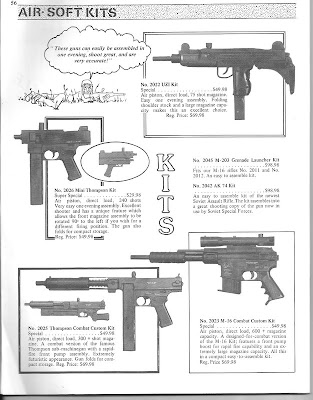 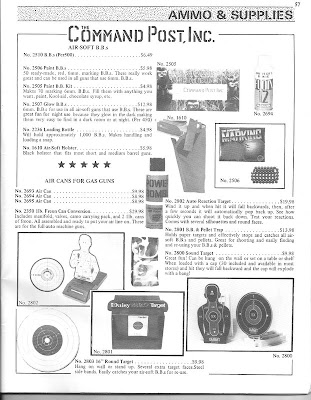 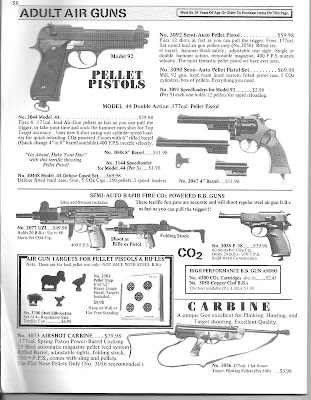 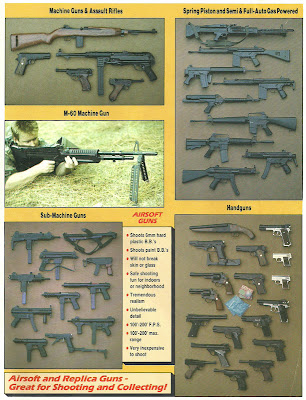 Hope you enjoyed this little trip down memory lane,
I wanted to get it in print before my feeble mind forgot more stuff,
where was I ,,,,,,,,,
Oh ya, GET OFF MY LAWN.


Till tomorrow,
Stay Thirsty my Friends