Blast from the past, SHOT Show 1987 with airsoft.

When I say I have been into airsoft for a long time,
I really mean a looooooooooooong time.

Just dug up some pictures from the first time airsoft guns were shown at the SHOT show.
Now, back in 1987 , the SHOT show was a whole lot smaller than the behemoth it has become,
here are some pic's taken from the over-walk in the Riverside center in New Orleans. 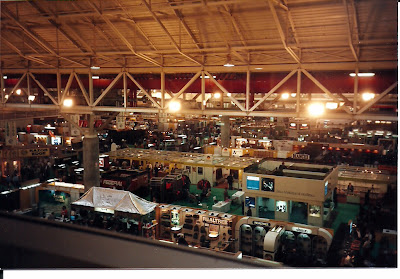 Realtree has a 10ft inline booth, Federal really stepped up with a 20x30 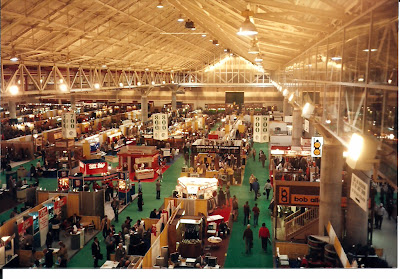 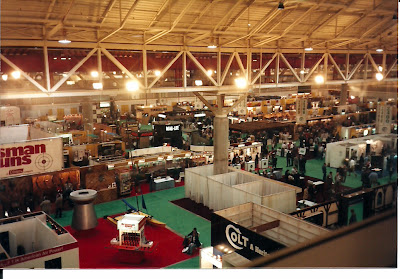 Crosman had a huge display, of course no where near today's size.

That was just about the entire show, I have not been able to find how many vendors were there, but it was not a huge number.
Now here was our booth, Airsoft, brought to you by Command Post 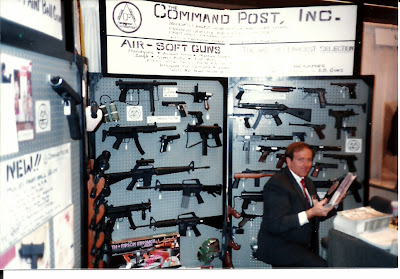 No aeg's ( they had not been made yet), some "Classic" ( now days) MGC guns.
Lots of spring TM's and such.
On the left side is the Para Ordnance Model 85 paintball sub gun, yes para got into the bizz by 1st making a primer propelled full auto paintball gun, a few years later they had the idea for a double stack 1911 frame, and the rest was history .
That is Laurence ( Larry) Lee Littlefield in the monkey suit.
The founder of Command Post and  a hell of a guy to work the trade shows with.
How about that display?
The paint was still wet when we loaded it into the suburban to drag it to New Orleans.
You have to love the magic marker signs, made up just for SHOT
We were right across from a 10x10 booth that was selling some strange looking knives,
Spyderco, I think the name was, I don't think they ever caught on. 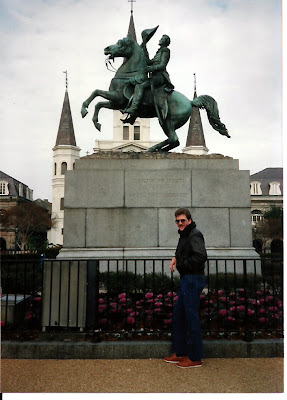 Me in Jackson Square after set up, yes, I was young once.

Now some pictures of Command Posts command center.
We started in a two room office, moved to a house that had been converted to a law firm and then ended up in a three story old department store on the main drag of Crestview FL. 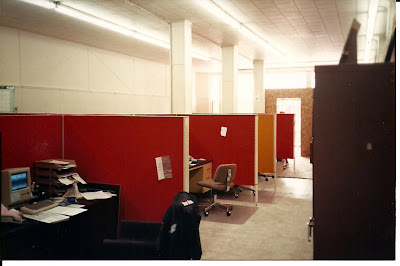 This was the sales center, we put the money into inventory and computers,
not so much in ambiance. 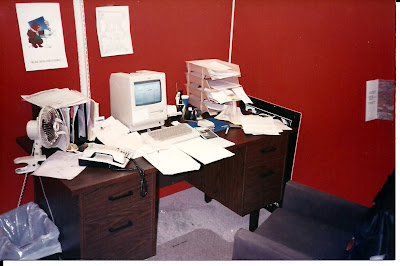 My office, 1987/2011 my desk at home looks just like that, in fact I am using the same computer!
I wish I remembered what model those were, I know that they cost us and arm and a leg back then.

I think I found a commercial for that model, see below
We were so "too cool for school" in the past!!!!!! 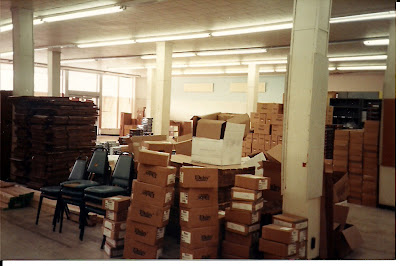 If you expand the pic and look close, you can see the stacks of Tokyo Marui springers in the black and silver boxes. The daisy boxes in the foreground are part of the huge amount of "soft airs" that we had.
Daisy only marketed them for a year or so, we bought all of their inventory when they shut down the line.
I think it was about two box cars full, yes we had a train spur at the back door and got a lot of our freight via railroad, not kidding about this, it was a lot cheaper way to ship.
We used to get paintball by the boxcar from R P Shear,
man that was a mess if the boxes had shifted during travel.

I will try and get the catalog scanned after the North Atlantic Airsoft Expo is over,
Will be updating from the Expo each day,
I know I said that when I went to SHOT, but this one is close to home.
Just a couple more pic's to suffer thru, hey old men like to reminisce. 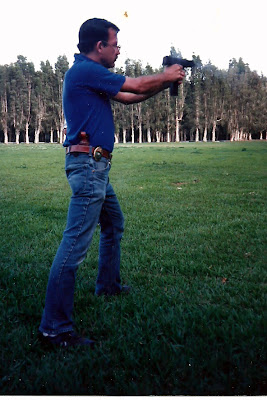 Massad Ayoob ( Google him) shooting a Para Ordnance model 85
Paintball subgun at the Trail Glades range in Miami in 1987 during a LFI 1 course. 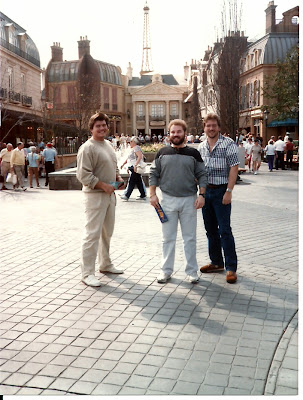 Ernie could cut you six ways from Sunday before you could even blink, I learned a lot from that man, he was truly a super guy that died too early.
Lynn was a trip then, and if you have seen any of his you tube Cold steel proof vids, he still is now.
Man, was I ever that young.

See you tomorrow,
And remember,
Stay Thirsty My Friends.

Posted by Tim Ellwood at 1:13 AM 3 comments: Links to this post

I know it's not airsoft, but this is coming soon
Barny from "How I met your mother" would be soooo stoked.
Suit up and watch this vid

I played many eons ago in Dallas, I had just left the Dallas Fantasy fair ( I was a vendor,  selling airsoft) and if I remember right, I had a blast.
Looks like it's come a long way since then.

Posted by Tim Ellwood at 11:59 AM No comments: Links to this post

Email ThisBlogThis!Share to TwitterShare to FacebookShare to Pinterest
Labels: How I Met Your Mother, Laser tag

Here is something I don't see often

Taking the game outside: Fun for families with avid gamers

We're officially more than one decade into the 21st century and our kids are all about high-speed, instant updates, high-tech gadgetry and simulated reality. Of course, we all want more time with our family. Children who spend extra recreational time with their families are significantly less likely to develop substance habits later in life, according to a recent study by the National Center on Addiction and Substance Abuse.

It's harder than ever to get your family to go out and do something that doesn't involve a TV screen, but there are ways. The modern family picnic has to cater to these modern high-interaction family dynamics, but what can compare to the entertainment value of the countless satellite channels and ultra high-def games kids play at home on the couch? Try looking for inspiration in the video games kids play - and then take it outside.

While you wouldn't want the gun battles that are so popular among gamers to be translated literally, a fun, safer version of them might just show your kids how great it can be to switch off the gaming console. For instance, Airsoft, is a sport played with replica firearms, conceived in Japan in the 1970s, is one idea. It's a competitive recreation that involves tactics, team work and physical endurance and has a strong cult following.

"Airsofters" range from the casual weekend renters to the hard core MilSim (military simulation) crowd who camp with their platoons for days or even weeks in the wilderness. The U.S. military and some state law enforcement agencies even use higher-end Airsoft guns to train their operatives due to the metal models' realistic feel and weight.

With appropriate safety precautions, (eye/face protection) "airsofting" is completely safe and fun for all ages, in addition to being affordable. There are many quality airsoft retailers like Airsplat where you can get a good spring powered pistol for less than $10. For families with avid gamers, it might just be an untapped source of entertainment that no 21st century kid would turn down.

Parents, just think of the reaction your teenage video-gamer would have if you handed him a pistol and said, "We're are going to an obstacle field to shoot at each other with replica guns. Are you game?" And kids might be surprised what their parents would be up for if it involves the whole family having fun outdoors.

kudos go to KBVI, east Idahos news leader for reprinting what looks like a Airsplat  PR release.
Any good news we can get I am all for.

Posted by Tim Ellwood at 1:21 AM No comments: Links to this post

BATFE again, Some GBBR's are firearms

A Seattle TV station has posted a story to their website linking some internal memos obtained from BATFE
http://images.bimedia.net/documents/Internal+ATF+memo+on+airsoft+findings.pdf
Now these memo's predate the  the BATFE website entry's we had found earlier.
http://noairsoftforoldmen.blogspot.com/2010/11/and-now-ggbr-m4m16s-are-legal-again-ta.html
BUT,  now we have this letter dated Feb 2 2011
http://images.bimedia.net/documents/ATF+statement+to+KING.pdf
I spent almost an hour talking with a BATFE representative at SHOT show about this issue,
He would not go "on record" but did say that it was still ongoing and something would be released within a few weeks.
Now, here it is a few weeks later and we get this.
http://www.king5.com/news/local/Government-Documents-Declare-Popular-Toy-a-firearm-115198119.html
They are firearms, They are not firearms, They are toys, They are guns,
frankly, even I am getting confused.
I thought this part of the news article was particularly telling,
While ATF has ruled that guns like this are firearms, it appears to still be stinging from the criticism.
ATF refused to explain on camera what its ruling means to people who buy or possess these guns. The public records we received are heavily censored. Even those marked "media plan" are blacked-out.
Please, it would be great to know if the "thousands"  of these toys
in the hands of American citizens are illegal or not.


A lot of people seem to think that if the GBBR they own is ruled
a automatic firearm that they will still be OK, that ATFE has bigger fish to fry and won't bother them.
For those people I would like to point you to this site
http://en.wikipedia.org/wiki/David_Olofson
This guy had a AR with worn out parts that went auto for three rounds then jammed,
he was sentenced to and is serving  30 month s in a federal prison.
As right or wrong in your eyes this may be, it is a very serious matter.

I am not a lawyer or legal council, I don't even own a GBBR, the only iron I have in this fight is
the fact that this issue is getting very little notice.
It could unwittingly make unknowing people into criminals in the eyes of BATFE.
Airsoft has yet to have any form of lobbying body or watchdog group
like real firearms have to protect our interests.

Posted by Tim Ellwood at 1:28 PM 4 comments: Links to this post

Yes it's getting to be that time again.
http://www.naaexpo.com/
less than a month away at this point, everything is pointing towards a great second year.
last year was a great start, and attendees had good things to say about us, this year we continue to grow.
The vendor list is reading like a who's who of airsoft,
Ares, Big Boys Toys, Crazy Cromags, KWA, Systema, Pantech, Pyramid Air and many other vendors will be in attendance to show off there new guns and gear.
We just reached the mark of our 25th vendor coming on board today.
(To give you an idea, there were less than 20 true airsoft vendors at SHOT show in 2011)
We are also proud to have some of the stars and production gurus from the youtube hit

They will be at the expo mingling and shooting a new youtube vid.

If you have the chance, please come on by and enjoy the weekend.

If you have the money, spring for the VIP ticket,

we have a great party planed for Friday night for those who do.

Look back thru some of my postings last year for pictures of 2010's inaugural outing. 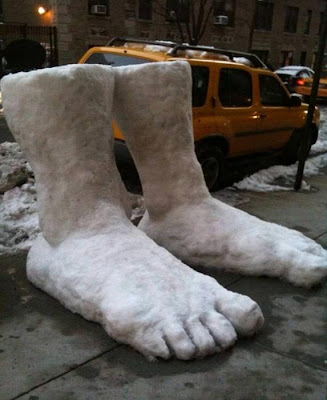 I hope the weather holds and we don't get two feet of snow!

Posted by Tim Ellwood at 11:09 PM No comments: Links to this post